It looks like 2012 is the year for native PCIe (PCI Express) interfaces to NAND Flash devices. Hot on the heels of the PCIe-based XQD memory card specification from the Compact Flash Alliance (see “Nikon D4 camera and Sony H Series Flash memory cards usher in the era of high-performance XQD cards with PCIe interfaces”) comes the 88NV9145 native PCIe SSD controller IC  from Marvell. The PCIe interface specification is tremendously popular in PC and server designs and is becoming increasingly popular in embedded designs as well. The advantage of a native PCIe-based SSD is that the host CPU can directly communicate with the NAND Flash array instead of using a SAS or SATA disk controller to translate storage accesses into a disk protocol, only to have the protocol translated once more into a protocol that the NAND Flash array understands. 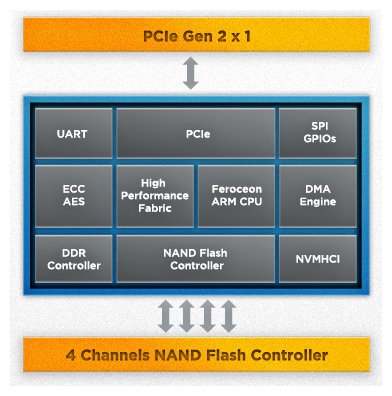 As you can see, one ARM-based Marvell 88NV9145 SSD controller IC can control as many as four NAND Flash channels. Once in the PCIe world, it’s relatively easy to use standard, low-cost PCIe hardware such as a PCIe switch to control much larger NAND Flash arrays controlled by multiple Marvell 88NV9145 controllers as seen in this diagram: 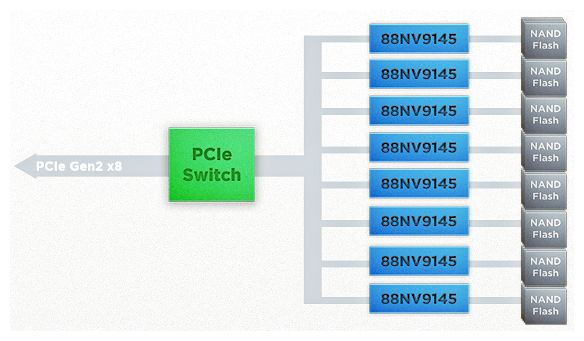 For a more in-depth technical analysis of native PCIe SSD designs, see this Marvell White Paper hot off the press.