Toshiba has just launched a new SSD family called the THNSNF series based on the company’s 19nm Toggle NAND Flash multi-level cell (MLC) devices. The SSDs are offered in capacities from 64 to 512Gbytes. All members of the family employ 6Gbps SATA interfaces. Member of this family include 9.5mm and 7mm 2.5-inch drives and three mSATA drives in capacities from 64 to 256Gbytes. The press release mentions the use of a Toshiba-proprietary error-correction code called “Quadruple Swing-By Code” or QSBC. Error correction is a major point of SSD differentiation and it appears that Toshiba has something new here to talk about. 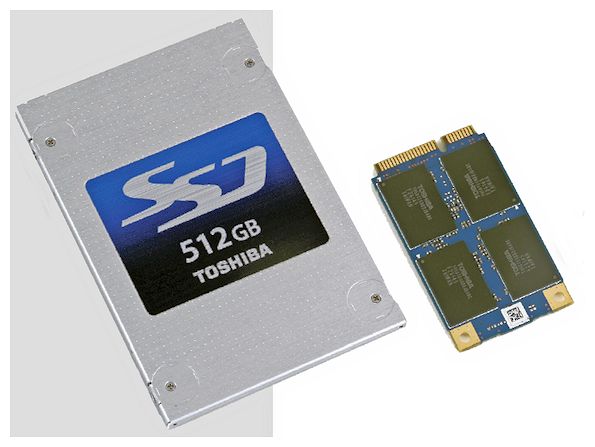 The THNSNF press release also says something about “efficient power utilization of less than 0.1W” but the preliminary data sheet makes no mention of power consumption. If the press release power numbers prove out, then these drives are going to become mighty popular in notebook computers, tablets, and many other portable devices. For comparison, Toshiba’s new THNSNS SSDs based on 24nm NAND Flash devices draw between 3.7W and 5.8W depending on capacity.

The new THNSNF drives are expected to be available in August.