JEDEC Mobile Memory Summit: The pace quickens and memory standards must keep up

CES hosted the JEDEC Mobile Memory Summit on January 12th to review the current state of the market for mobile semiconductor memory and to discuss future trends.  It was a full day review of current mobile device trends, the impact of these trends on memory, and how the mobile memory vendors are poised to respond.

The day started with a market overview and social networking has become the top driver for mobile memory requirements, which probably should not be a surprise to you. This trend isn’t expected to slow down soon—you should expect an additional 10X growth in unit shipments by 2020. 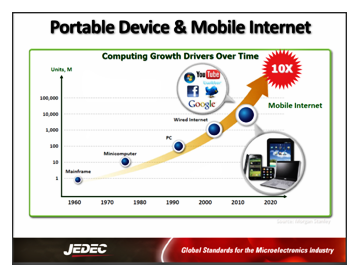 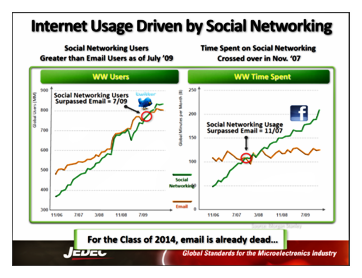 Non-volatile mobile memory standards have evolved very rapidly to address these increasing demands through multiple generations of Flash semiconductor memories based on the eMMC (embedded MultiMediaCard) standard and the new generation of UFS (Universal Flash storage) devices.  To appreciate the pressure that the mobile device market has put on memories compared to server memory evolution timelines, mobile memory standards have had to evolve more than twice as fast to keep up with market bandwidth and performance demands. 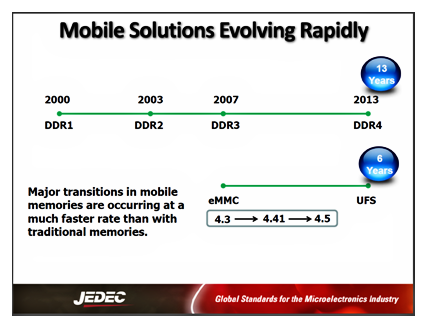 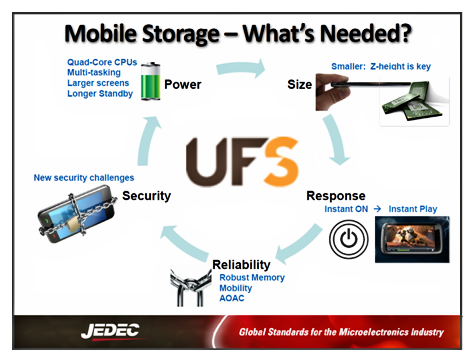 The rapid worldwide market evolution in mobile handset design places extreme pressure on the evolution of feature phones. Established smartphone markets—particularly in markets like the US—are experiencing demand for more memory bandwidth and higher device performance whereas emerging markets, like Asia, are more focused on low cost, upgradeable devices.  This dichotomy puts feature phones in between two increasing market segments. The expectation is that this market will come under further increasing pressure in 2012. 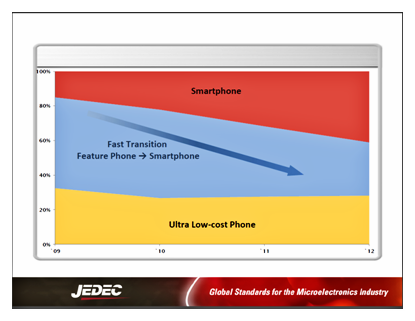 Growth in the smartphone market and the demand for increasing performance in this segment drive the adoption of faster memory standards such the LPDDR3 SDRAM standard while the cost-conscious emerging markets are demanding a longer tail to the use of more economical memory such as LPDDR1 SDRAM.

Another significant emerging trend in the mobile handset market is the transition of mobile devices from use as a “consumption” device to the role of “creator.”  The current view is that there is an upcoming inflection point in 2012 where sales of devices that support creative activities will begin to outpace consumption devices, a situation partly driven by the expected growth in productivity focus with new application platforms such as Microsoft Windows 8. Further, by 2013, it’s expected that demands for smartphones optimized for creative activities will drive the evolution of all-in-one devices that satisfy the demands for both consumption and creation.

As this inflection point nears, it will also require more onboard, higher performance memory in every device to support these new creation needs.  To meet these needs, it is expected that by 2013, the memory per device will grow by 2X as compared to 2011 configurations.  In addition to the growth in memory per device, the overall device sales for smartphones and tablets are also expected to grow by nearly 2X in the same timeframe.  These compounding growth rates and their hunger for increased performance dictate that new approaches to onboard memory and storage must be found. UFS memories are poised to answer this call. 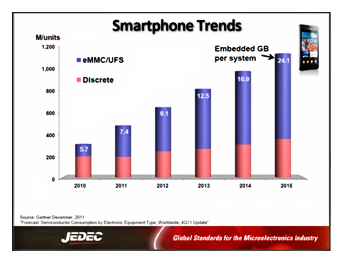 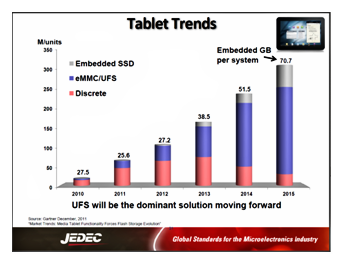 The world continues to become more closely connected, always on and increasingly more social.  As this Web 3.0 advance continues, the exponential growth in demand for data continues to put unheralded demands on all parts of the “delivery system” ending in mobile devices. 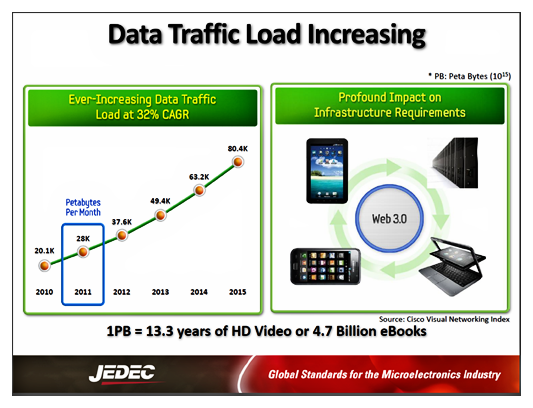 Keeping up with these increasing demands is not optional; it’s a necessity requiring new approaches in “mobile centric” storage.  Offering lower power consumption, higher performance, low-latency and high IOPS, UFS is answering the call not only for today’s mobile memory needs but also for future needs. UFS is the next generation of non-volatile memory for mobile markets and it’s designed to meet the “social” needs of mobile users around the world.