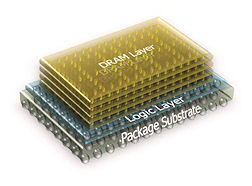 This week, Microprocessor Report selected the Micron Hybrid Memory Cube (HMC) as the “Best Microprocessor Technology” of 2011. Why? As Tom Halfhill writes:

He then continues later in the article:

“Even so, memory cubes will not replace commodity DRAMs anytime soon. They will appear first in high-performance servers and supercomputers. Thanks to their high density and power efficiency, future implementations may also be suitable for small mobile systems, such as smartphones and tablets. Over time, as manufacturing costs plummet, stacked memory could eventually supplant conventional DRAM. Therefore, the Hybrid Memory Cube is a crucial technology to watch in the years to come.”

For more technical coverage of the HMC, see:

Want to know more about the Micron Hybrid Memory Cube (HMC)? How about its terabit/sec data rate?